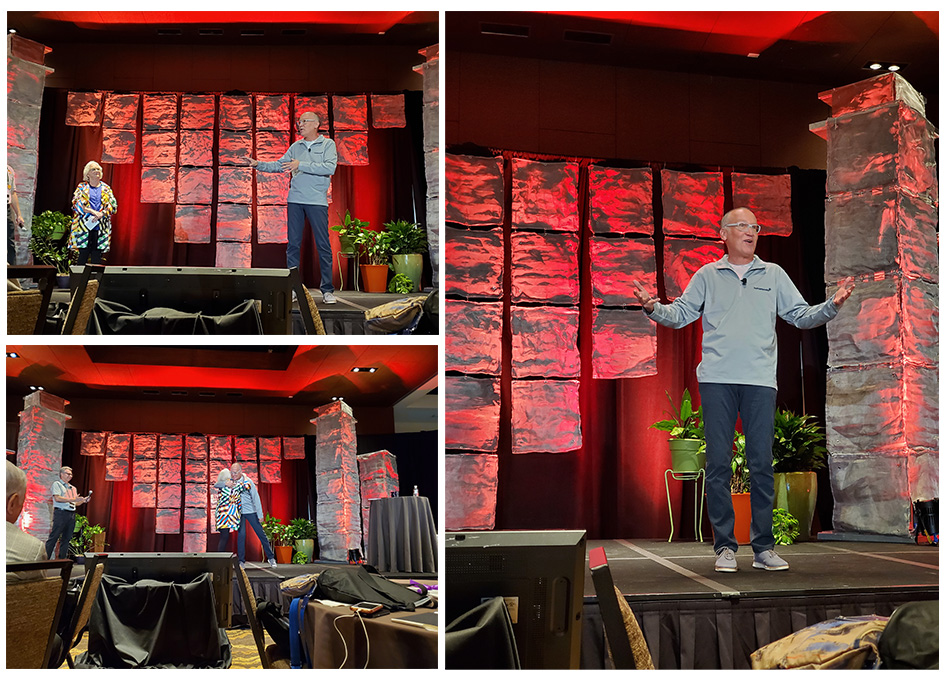 Attending the annual Kolbe Conation Nation Symposium has always been a highlight of my year, but in 2019 it was taken to a whole new level.

I had the opportunity to work directly with Kathy Kolbe on a mainstage presentation focused on her book: Powered by Instinct ‚Äì 5 Rules for Trusting Your Guts. I had used the book as source material in planning my next life upon leaving an organization after almost 25 years. My goal was to take the wisdom that Kathy had written about and make it my own. Not her words ‚Äì but my words. Personalize it in a way that would bring it alive for me and activate my best nature. Little did I know that 6 months later I would be invited by Kathy to share my experience and thoughts around what I had written. Funny, when you focus on your truth it comes back to lift you in ways never imagined. It‚Äôs kind of magical.

When I jumped back into Kathy‚Äôs book in April of this year, I focused only on what I felt she was getting to the heart of with each of her 5 Rules.

I read this rule and decided to just do it. I started writing about what I believed and what I had learned over the last 25 years. I didn‚Äôt know why or where it was going to lead me, but I knew it had meaning to me and I would be creating something ‚Äì something new.

I also knew that I could think about it later. Edit later. Improve it later.

The freedom and energy that came out of this purposeful action was amazing. I had jumped in, my way, and started creating. I wasn‚Äôt worried about the specific outcome only the joy of the moment in expressing myself. I thought I might create a mess but decided to relish the mess and clean it up later.

Throughout this time when people asked me about what I was doing I always replied, ‚ÄúI don‚Äôt know what I‚Äôm doing, but I‚Äôm doing it anyway.‚Äù

That became the first rule I made my own. Kathy would say, ‚ÄúAct ‚Äì Before You Think.‚Äù

When I re-read this rule, I reflected back on a year of feeling stifled and held back from being able to freely express what I believed in when it came to putting people first in an organization.

It hit me almost immediately that moving forward I wasn‚Äôt going to wait for permission to move on actions that were right for people – and I don‚Äôt need to apologize for doing what I believe is right and will help people. People first and foremost, because they matter that much.

So, I thought, I have a purpose. So, go do something about it.

This one is all about being intentional.

I‚Äôm sure there are others out there with to-do lists or project lists ‚Äì and you use whatever tool or App that appeals to you to track and manage them.

I take a more retro approach using a pad of paper. I love to make lists. My trouble though is that I have multiple lists going on multiple pads. I even buy cool notebooks and pads to write the lists in, makes it more fun for me. Madness‚Ä¶

Now, I focus on commitments instead, both those that are highest priority for the business and my life, but also that align with my natural instincts that I have studied for many years through understanding my Kolbe A‚Ñ¢ Index.

What does that look like on a daily basis?

Daily I‚Ä¶ edit and explain.
Daily I‚Ä¶ bring something to an end or tweak a process or practice.
Daily I‚Ä¶ improvise and play with words.
Daily I‚Ä¶ imagine and suspend the need for clarity.

I try to intentionally target my energy around those actions I love to do and that add the greatest value. And I can tell you it has worked. It is providing me more energy during the day and I feel I am accomplishing what matters most.

This is probably the rule that began it all. A year ago, I had my first written review in over a decade where my new leader told me I was obstinate. I couldn‚Äôt remember being called that ever before, but the word and its meaning took me straight to Kathy Kolbe and her thinking. It may not have been meant as a positive, but I accepted the feedback as a badge of honor.

I had been fighting for what I believed would be best for an organization ‚Äì for what I had seen bring success and freedom for people to be at their best. And I decided I wasn‚Äôt going to stop‚Ä¶

I would continue to be relentless about what‚Äôs important. No matter how many naysayers in my path. I would find a way. It exists.

Rule # 5: Do Nothing ‚Äì When Nothing Works

When I started to jump-start my new life last April, I knew that I needed to give my instincts a rest ‚Äì the numbness that I felt prior to April was from my instincts being in overdrive and finally worn out.

I believe to really see the world and one‚Äôs place in it you need to have all three parts of your mind at the ready. You have to find ways to ‚Äúescape‚Äù or ‚Äúre-charge.‚Äù

One of my ways to do this was through quiet, stillness and just being with myself. This is just one outlet where I give my striving instincts a rest so I can see the world more vividly and gain my presence of instinct more fully. Doing ‚Äúnothing‚Äù for me is like adding nutrients to your being.

The theme of the 2019 Kolbe Conation Nation Symposium was IGNITE! I was lit up before walking through the conference door. I had brought together a team of people who believe and care about people the way I do. We had created a consultancy team based on beliefs that will elevate any business. We launched humanworks.